The Western Frieze of The Monument

Discover the meaning behind The Monument's Frieze

The Monument to the Great Fire of London is located on Fish Street Hill, just next to Monument tube station. Hundreds of thousands of people pass the memorial every week, but many passers-by won’t have noticed the beautiful sculpture adorning it’s western face - even fewer will have taken the time to decode it’s intricate and historical meaning.

This page will answer your questions on who carved the sculpture on The Monument and what the carving on the base of The Monument means. Read on to discover the meaning of the Frieze and the man behind the carving, Caius Gabriel Cibber.

Danish sculptor Caius Gabriel Cibber was born in Flensburg, a town in the border between Germany and Denmark, under the name of Sieber. He moved to London in the late 1650s, following the completion of his studies in Italy.

In London, Cibber set up his own workshop and started receiving many commissions. However, he was far from careful with his money and racked up some serious gambling debts, wasting away his and his wife’s resources and eventually being detained in prison for these unpaid gambling debts.

When Sir Christopher Wren and Dr Robert Hooke started to build The Monument in 1671, they received court permission to employ Cibber. Over the six years it took The Monument to be completed, Cibber was released during the days to work on its bas-reliefs but had to return to prison at night.

Cibber’s troubled circumstances didn’t prevent him from producing some magnificent work on the bas-reliefs that decorate The Monument’s pedestal. It sheds a light on the significance of the Great Fire to those living in the City at the time, and what happened afterwards in London.

The carving on the west panel of The Monument’s pedestal, facing Fish Street Hill, is one of the most interesting sculptures in the City of London. The frieze is allegorical, telling us the story of the destruction of London during the Great Fire on the left, and its subsequent reconstruction on the right. 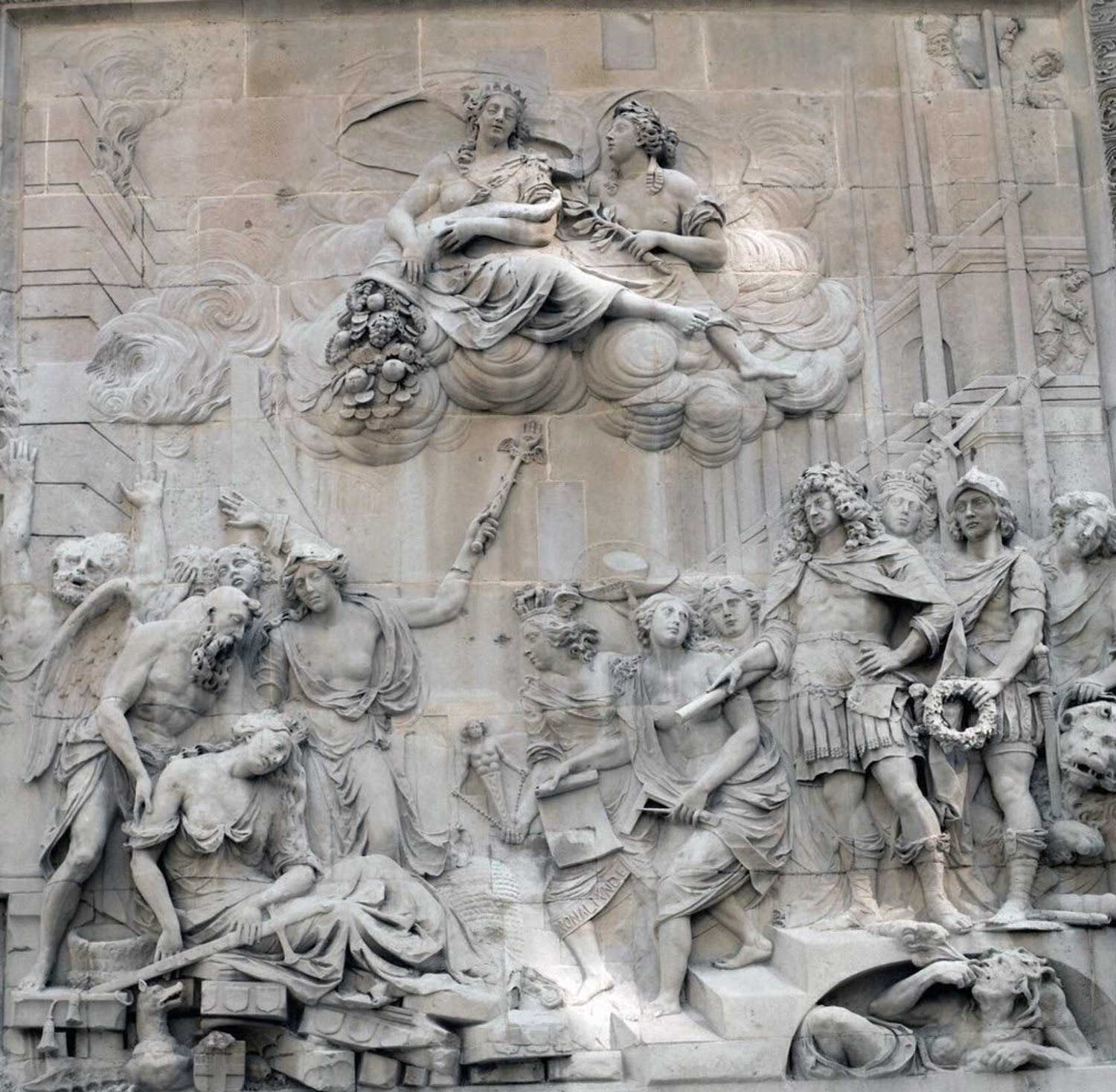 Each character in the relief symbolises or represents different things. Let’s start from the left.

Sitting on broken masonry in the bottom left corner, holding a sword, we have a female figure, who represents the City of London. She sits above a dragon, which has been the symbol for the City of London for centuries.

Standing behind her with wings is Father Time, helping her back to her feet. He also has the help of Mercury, representing Industry, who is holding a caduceus, a decorated staff that is the symbol of trade, commerce and negotiation. 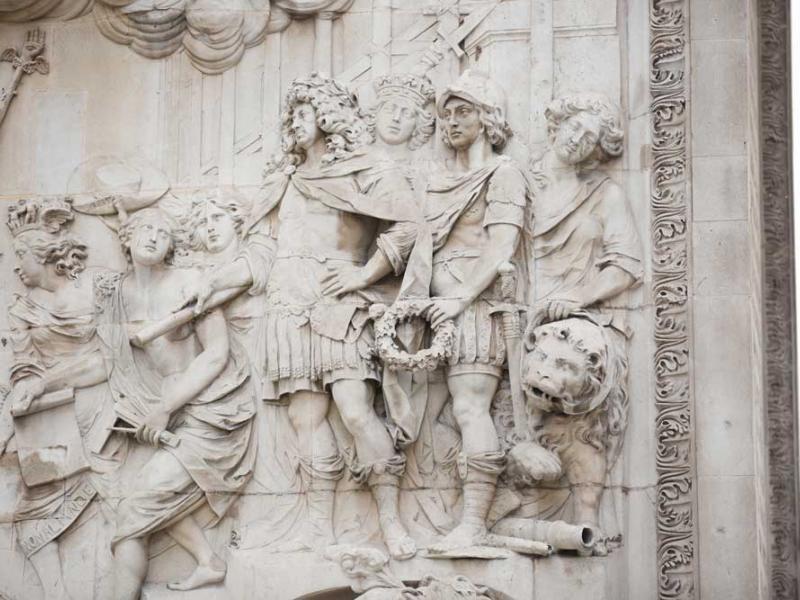 On the right,  a group of figures are shown walking towards the City of London. The central and most prominent character is King Charles II - he is dressed as a Roman Emperor, standing in all his majesty on a stone platform with a baton of command in his right hand.

He gestures towards the personification of Architecture, who’s holding a square and compass in her left hand, and the plans for the new City of London in her right.

Liberty stands behind Architecture, watching and holding her cap, bearing the word Libertas. 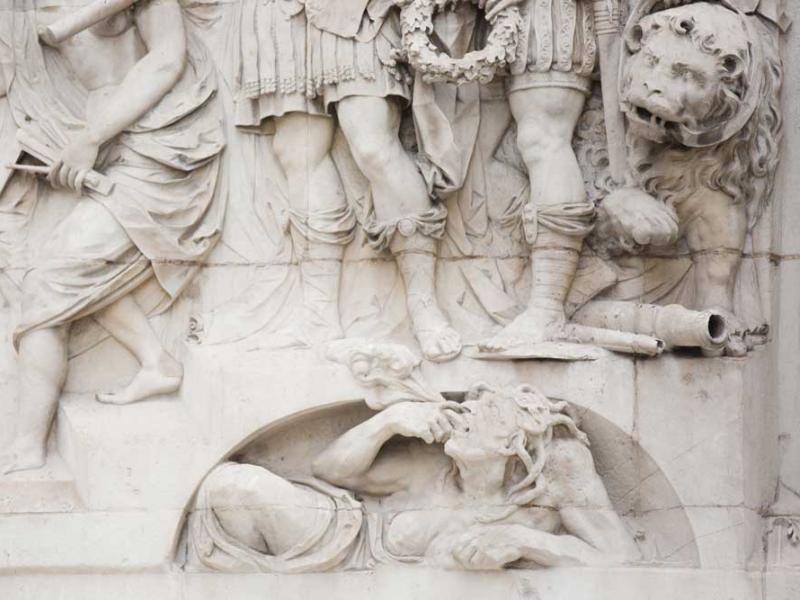 A third female figure, to the left of Architecture, represents Imagination. She wears a winged “crown” with little figures on it, like“children of her brain”. These have been interpreted as symbols of fruitfulness and good ideas. She also balances the representation of Nature in her hands, a multi-breasted little statue, which symbolises nature’s abundance.

To the right of King Charles II stands his brother, the Duke of York, who was instrumental in putting out the Great Fire. The laurel wreath he is holding represents Victory. Behind them, two more figures can be seen: Justice, the one with a coronet, and Fortitude, holding a lion on a leash.

The strange figure underneath the feet of the group at the bottom right is Envy, gnawing on a heart and, literally, ‘steaming from her mouth’. 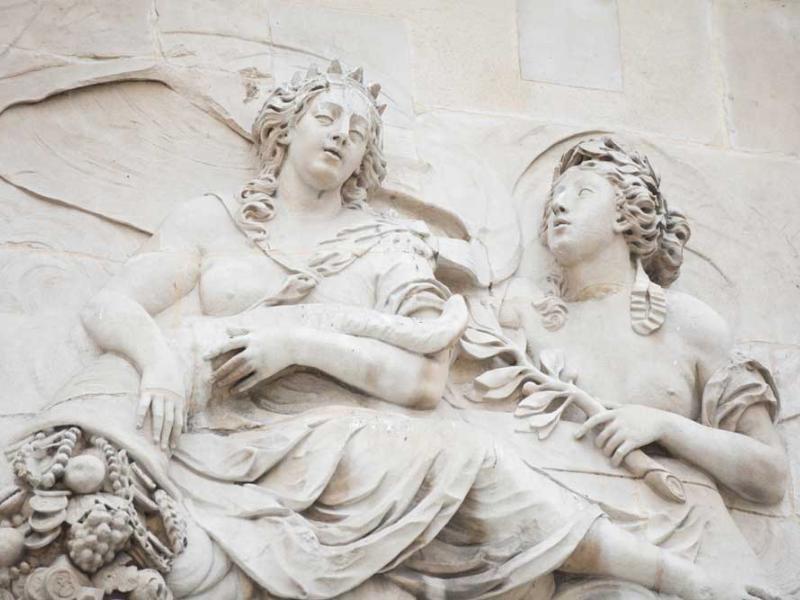 The top and background

If you look closely, you can also see that there is a lot going on in the background. Shown in faint relief there are several people and some buildings in flames. Two scenes are showing London on fire (on the left), and London being rebuilt (on the right).

Above it all, hovering in the sky watching over the entire scene, we have Plenty and Peace – the symbols of hope and recovery after tragedy.

Discover everything you need to know before you climb The Monument to the Great Fire of London including opening times and ticket prices.
Read more >

The Great Fire of London FAQs